Russian Revolution is one of the best sons of four times Australian Champion Sire Snitzel (sire of 108 stakes winners including 15 Gr.1 winners) at stud and little wonder that his first crop of yearlings are being so well received.

A brilliant winner of seven of his 11 starts, the $320,000 Easter graduate was seen at his best winning two Gr.1 sprints - the Oakleigh Plate (the race also won by his sire) and The Galaxy. Retired to stud as the winner of over $1.2 million in stakes, Russian Revolution has been well supported by breeders around the country.

Also boasting a cross of the aptly named matriarch Special via her son Nureyev and grandson Fairy King, this filly has the type to match her pedigree - and she is from a great local family.

She is the first foal for the lightly raced winner Supreme whose Gr.1 winning sire Encosta de Lago was twice crowned Australia's Champion Sire - doing a great job with his 115 stakes winners, 27 of whom were successful at Gr.1 level.

Three of those high class gallopers are by Russian Revolution's sire Snitzel - this is a cross that really works!

Supreme's dam Staging made her name both on and off the track, firstly racing her way to ten victories from 41 starts before really proving her worth as a broodmare.

The winner of over $1.1 million in stakes, Staging won eight times at stakes level including four Gr.2 races and two Gr.3 contests. Gr.1 placed on four occasions she was tough and consistent in the best of company.

Seven of Staging's foals made it to the track and all bar one were winners, two of them - Duporth and Excites (both of whom went on to sire stakes winners) successful at the elite level... Duporth (sire of the four times Gr.1 winner Hey Doc) taking out the Gr.1 BTC Cup and Excites the Gr.1 AJC Sires Produce Stakes.

Also dam of the Gr.2 galloper Tickets and the city winner Succeeding - in turn dam of the dual Gr.1 winning South African star Delago Deluxe (by Encosta de Lago), Staging is one of six winners produced by the excellent broodmare Cinerama, also dam of the durable stakes winner Dashing Image.

Ancestress of the stakes winners Caliente and Tiyatryolani, Cinerama is one of six winners for the multiple city winning successful broodmare Bold Bridget, also dam of the terrific horse River Don, Listed winner of 12 races.

The Group winners Millenium Diamond and Lonhspresso are also descendants of Bold Bridget whose city winning half-sister Welcome Back (dam of the triple Gr.1 winner Always Welcome) is the grandam of the four times Gr.1 winner Mannerism.

This family, one which descends from the famed matriarch Teppo, has been producing high quality gallopers for generations, her other descendants including the big race winners Hallmark, Trivalve, Nuffield, Three Wheeler, Paratroopers, Murray Stream, Luskin Star, Let's Get Physical, Streak, High Regard, Marstic, Xtravagant and Roman Arch. 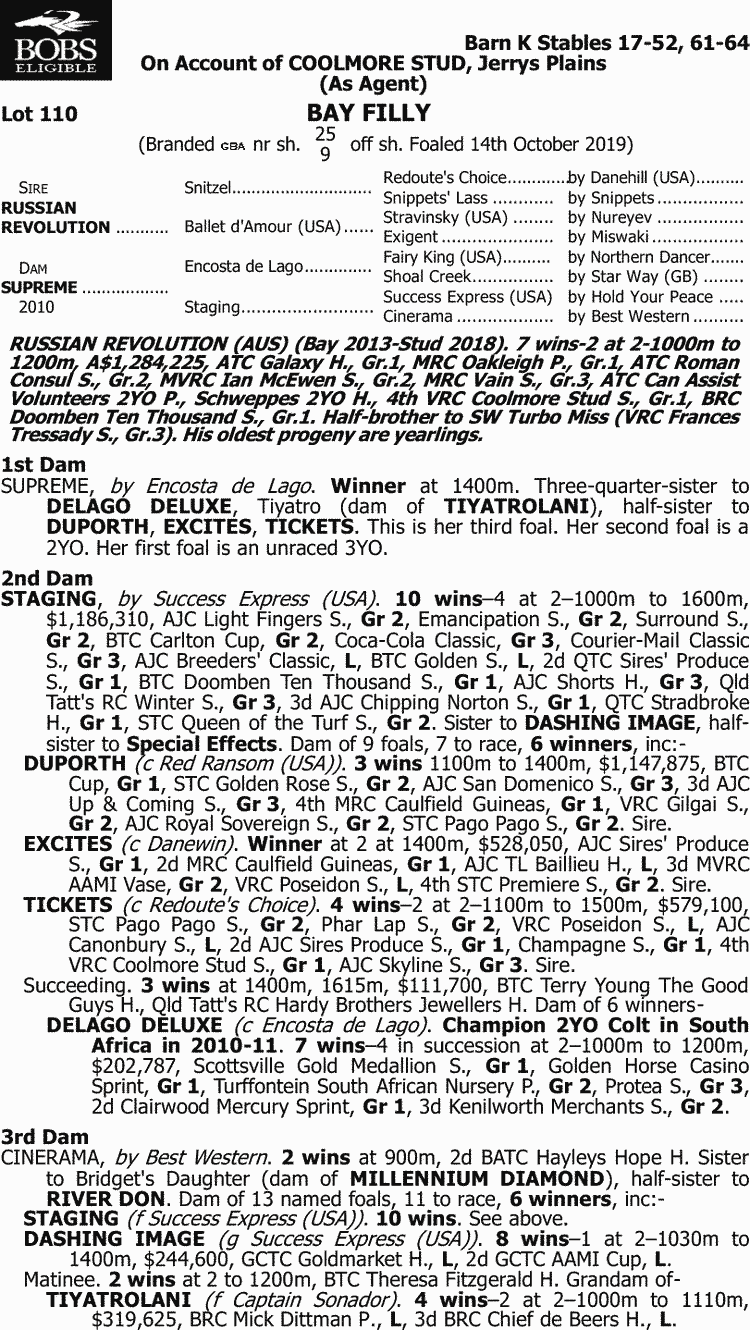